‘Let Modi not be in the news, I will stop making cartoons on him.’

Cartoonist Manjul got a shock last fortnight when he received a notice from Twitter stating that it had been sent a notice from law enforcement agencies asking the social media major to suspend his account.

On Thursday, June 10, tweets stated that Manjul had been suspended from drawing cartoons at a media organisation, apparently for a cartoon he drew on Prime Minister Narendra Damodardas Modi.

“The Modi government wants everyone to become chaaraan. Chaaraan were the people who used to sing praises to rajas in ancient kingdoms. This government cannot expect the entire country to become their chaarans,” Manjul told Rediff.com‘s Syed Firdaus Ashraf in an interview recorded before Thursday’s development.

The second part of a must-read interview!

Is it something in the DNA of a cartoonist that he always criticises the government no matter which party rules?

This example you will not see anywhere in the world.

This establishment wants to make fun of that common man.

A cartoonist feels that the man who is weak and whose voice is not being heard, he gives voice to him through cartoons.

The same Ravi Shankar Prasad used to ask for the resignations of ministers when he was in Opposition.

Smriti Irani used to take out morchas during the petrol and LPG price hikes.

That time they never called cartoonists anti-national when I was making cartoons on the price rise of petrol and LPG.

The point is that the BJP has changed, not cartoonists.

Satish Acharya is another cartoonist who criticises the Modi government and he used to do the same thing against the Congress government when they were ruling before 2014.

I am not sitting here to just criticise the Modi government.

If you see the Modi government’s ministers then you will find that not more than 5-7 ministers speak (to the media) and the rest all keep quiet.

You only count and tell me how many of them are decision-makers.

In total, you get three ministers who make announcements: Narendra Modi, Amit Shah and Nitin Gadkari.

In that too, the maximum announcements are made by Modi.

So when it comes to taking criticism, then the Modi government must take the blame too.

If there is no place to burn dead bodies on pyres in crematoriums, then you cannot expect that your government will not be criticised.

The Modi government wants everyone to become chaaraan. Chaaraan were the people who used to sing praises to rajas in ancient kingdoms.

This government cannot expect the entire country to become their chaarans.

God knows what was not told to him.

He suffered but he never responded but said only one sentence: ‘History will be kinder to me.’

That is true today.

I am saying this because I have seen him since 1991 when he was the finance minister.

I am not a fan of Dr Singh or of Modi because I am just a cartoonist.

I made so many cartoons against Dr Singh when he was the PM.

Let Modi not be in the news, I will stop making cartoons on him.

If he promotes other people and they start making news, then I will stop making cartoons on Modi and make cartoons on the people whom he is promoting.

You must have felt hurt over this Twitter notice.

This is not the first time I have faced this kind of pressure from the government.

Government pressure is there on cartoonists and there is no denying it.

I have been a cartoonist since 1989 and saw so many governments functioning, but never in my career have I come across a government who is busy controlling the narrative.

I am not the PM of India.

I am a cartoonist who can make mistakes, but this method of sending notice is not right.

This notice too is very vague.

It does not pinpoint which Indian law I have violated.

The notice, on the other hand, just wants to intimidate me.

Do you think the Modi government is scared of cartoonists?

I don’t think cartoonists are that great people.

I don’t agree. The job of a cartoonist is difficult.

Now if the government gets scared of cartoonists, what can I do?

Today, there is social media and there are so many stand-up comedians who are so witty.

They do amazing shows.

If you start getting scared of these people, then how will you work?

I feel the government must be lenient.

These words were written with a lot of thought behind it.

I leave it to my readers to understand what I wrote.

Will you go to court in case your account is deactivated?

I can only do one thing good and that is make cartoons.

I don’t have that kind of money to hire top lawyers to fight my case whereas the government on the other hand has top lawyers and the solicitor general to work for it. 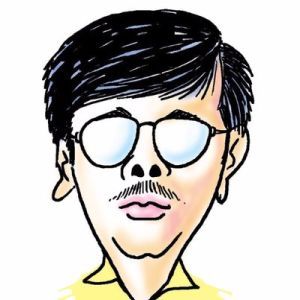 Did you ever face any kind of threat from previous governments for making cartoons?

Those governments were no less.

But the level of threat was lesser.

This government is trying very hard to control (cartoonists), but now the world is totally different.

In 1989, there used to be no mobile phones and landline telephone numbers were difficult to get.

We used to wait for three years to get a landline phone number.

Today, you go and buy a SIM card and in two hours your number is activated.

You are on social media within seconds.

Information access has changed and so has the world since 1989.

In earlier times, if you wanted to be a cartoonist, then you had to work for a newspaper.

Since all newspaper offices were in Delhi you needed to be in Delhi.

Today, these things are not required for any cartoonist.

Today, even if you are sitting in the jungles of Bastar, then can still become a cartoonist and put it on social media and become a star.

How can the government stop this?

If the Modi government does good work, why will anyone make fun of the government?

You think people of India do not understand why you are recalling the chief secretary (of West Bengal to Delhi)?

People see through this and they understand these things.

In earlier times you could control the media narrative.

No doubt they are doing that today also, but then there is the parallel social media which was not available earlier.

Therefore, they are trying to control social media.

Consumers are opting for ‘ethical choices’

Triguboff: Australia’s borders should be open